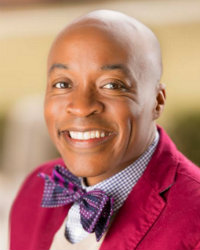 As President of ACPA I have the opportunity to preside over #ACPA18 in Houston, Texas, the bellwether state for anti-LGBTQ legislation in the United States. In the process, I also get to facilitate dialogue about the Governing Board’s decision to remain in Houston.

Holding the #ACPA18 Convention in Houston means we get to ask ourselves the questions that are confronting so many members on their campuses.

What does it really mean to be a social justice educator in a place that promotes ideas, policies, practices and/or programs that contradict our values?  What should we do? What can we do? What does it truly mean to live out the Strategic Imperative for Racial Justice?

The Governing Board has concluded that staying in Houston directly aligns the Association with the new Strategic Imperative for Racial Justice, which urges us to intentionally and directly engage with issues of race and racism at their intersections of identity, including nationality, gender identity, immigration status, socioeconomic status, disability, and geography.

In the case of Houston, immigrants, documented and not, as well as trans people, have been singled out and denied legal protections. They now live with less assurance of safety than even a few months ago.

This is why I believe that there may not be a better place than Houston right now to do our work as social justice educators. Convention is a place and time that can engage the largest percentage of our members and allows us to directly support our Texas-based colleagues and member campuses.

We’ve been on the ground in Houston as grassroots advocates and supporting our colleagues at the ACLU, Equality Texas, Trans Texas, and the Texas Business Alliance since the Houston Equal Rights Ordinance (HERO) was defeated in 2015 (Mulvaney, 2016).

Immediately after HERO failed, ACPA Executive Director Cindi Love and Deputy Executive Director Tricia Fechter Gates visited Houston in January 2016. Meetings included the Mayor of Houston, representatives from the Police Department, the ACLU, Trans Texas and Equality Texas and several human rights organizations in Houston. The overwhelming sentiment was that ACPA was welcome in Houston, and our advocacy and commitment to social justice was and continues to be needed now more than ever.

Our Convention in Houston will encourage us to think deeply, innovatively, and boldly about the ways that race and racism shape the experiences of those in our institutions and those who strive to obtain a higher education. We do not believe we should forego these opportunities and, therefore, we are remaining in Texas as social justice educators, as justice seekers, and in solidarity with our colleagues on campuses and those in the ACLU, Equality Texas, Trans Texas, and other human rights organizations.

I understand the perspective of members who believe we should withdraw from Houston and not invest any ACPA funds there. And I also hold the perspective of the significance of showing up, working alongside our trans colleagues and students, and advocating to foster change on the ground. For those who cannot attend for fear of safety or due to a desire to not spend money in Texas, we will provide virtual opportunities for engagement. We are raising funds for these purposes.

In closing, I encourage you to visit the Frequently Asked Page on the #ACPA18 website to learn more about our rationale for remaining in Houston. I hope you will continue to share feedback and ideas with me. I appreciate your engagement in ACPA and am pleased to serve as your President.